I'm a "HiFi-idiot". I don't believe $400 power cables give me better sound, but I'm not that far off either.

So a while back I bought a new AV receiver, a Denon 4311 to be precise, and it came with a few nifty hack-worthy features. The biggest one being the serial interface… which is also available over regular TCP/IP using a regular Ethernet connection.

The interface is meant for systems integration. It does offer a simple web interface that allows me to do most basic tasks too, but what's really interesting is the "Serial" interface. You talk to the receiver using a bastardized telnet-interface. It says TCP port 23, but don't expect telnet to "just work".

Denon kindly offers a full documentation of the interface, and it gives you all the features of the amplifier, from basic volume control to complete control over the iPod docking, including navigation of said iPod. I just HAD to do something with it.

The first thing I did was of course to write a munin plugin to graph the volume. This is an old (obviously out-dated) example: 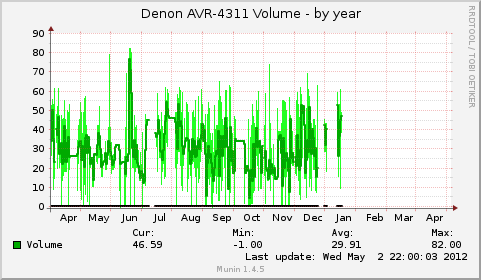 (main reason it's out of date: I've been fiddling with the munin install for a while and never bothered fixing it).

The code for that is available on Munin exchange, or my github page.

However, the Denon interface has a major drawback: It can only handle one connection at any given time. This means that if I'm doing something else with it, like adjusting the volume, the munin plugin wont execute. There are other problems too: If you try to bind "Volume up" to a key that spews the right command at the interface, it'll fail because chances are you'll want to adjust the volume for more than 0.5dBa at a time.

So I wrote a tiny little perl daemon:

The features are simple: vold.pl opens a single connection to the AVR and forwards a handful commands, like UP/DOWN/MUTE and allows switching to the "PC" input, which I've got configured as DVR on the receiver.

It also taps into the sleep-function, which I never use. Why? Because sleep is the only button on the remote control which:

I also hooked into mute. If I hit mute on my receiver, it not only mutes, but it pauses Spotify.

It's a fairly fugly interface, but fun. The ugliest part of the interface is perhaps that it uses carriage returns and goes rather bonkers if you try to send a newline. This makes it impossible to use the interface by just telneting directly to it (unless you find some knob to make telnet only send carriage returns AND behave generally nice. Keep in mind it also doesn't SEND any line feeds, so your terminal will keep overwriting the old text.)