About 4 years ago I decided to get in better shape. I took my bike for the longest ride I had ridden at the time, which was about 7km I believe. This summer, I took the train to Stavanger and cycled back to Oslo along the coast. All in all, it was a little under 500km and took me a little over a week (8 days of cycling), with the longest single stretch being 131km (final stretch home).

I had done the same trip, more or less, the year before and had learned a lot. But frankly, preparations were pretty simple:

I ride a relatively cheap Merida Cyclocross 3 for these sort of trips, which gives a nifty mix of speed and durability. And lets me attach a luggage rack. This year, I was trying out slick tyres, as I knew most of the route was going to be asphalt.

Stage 0: Getting to Stavanger

As it turns out, this was harder than it should have been. NSB (Norwegian Rail company, what the proper English name is is anybody's guess, since the "Company Information" page they provide in English is blank) provide separate tickets for bikes, and you can book it ahead of time. There's a max price which means that for long-ish distances, bringing your bike is pretty cheap (175kr or something like that is the max price). In theory, this is all pretty awesome. However...

In short: One big mess.

Thankfully, NSB customer services sorted it all out once I wrote them an e-mail, and I got my extra money back, got a ride to Bryne (where my brother picked me up), and had two seats to myself since my bike still had one reserved...

By the way: I lied, I rode from Forus, not Stavanger. Don't tell anyone.

In short: Wicked rain followed by great sun, two flat tires on the back wheel, lots of nice, flat terrain, swearing about stupid detours triggered by bicycle routes being made for sightseeing, not transport, then this: 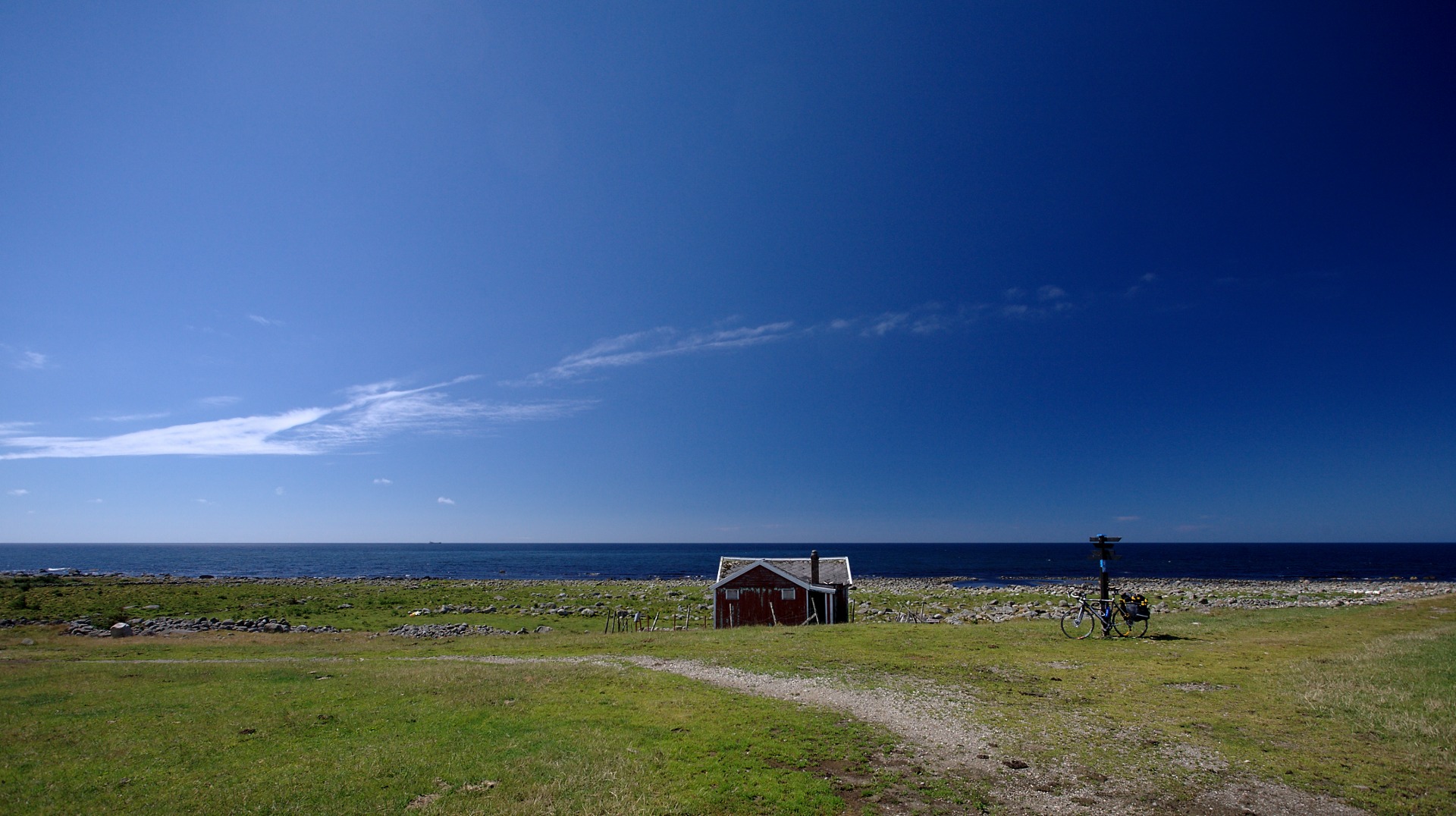 Some times, detours are worth it. 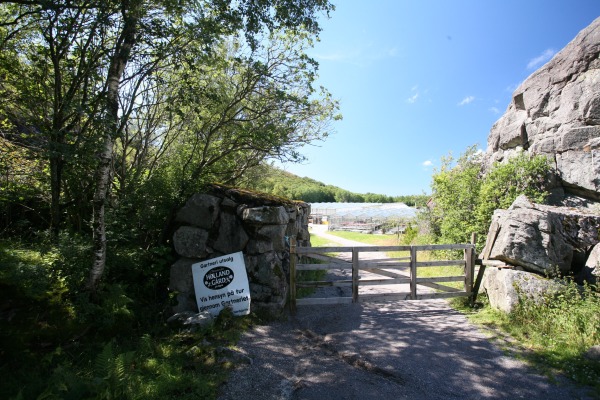 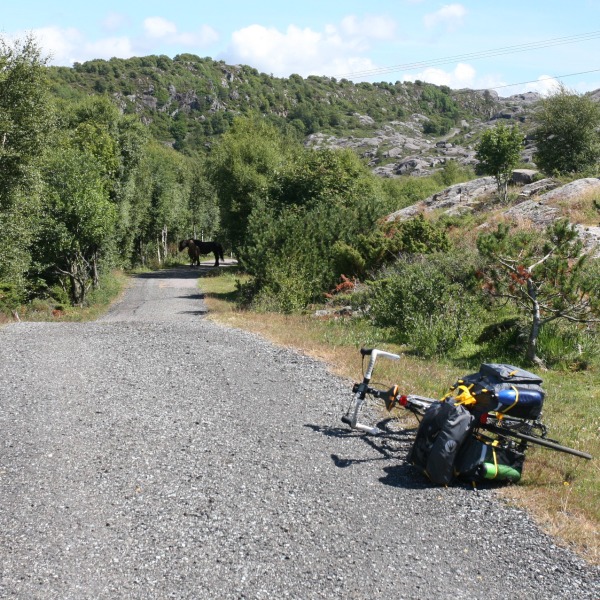 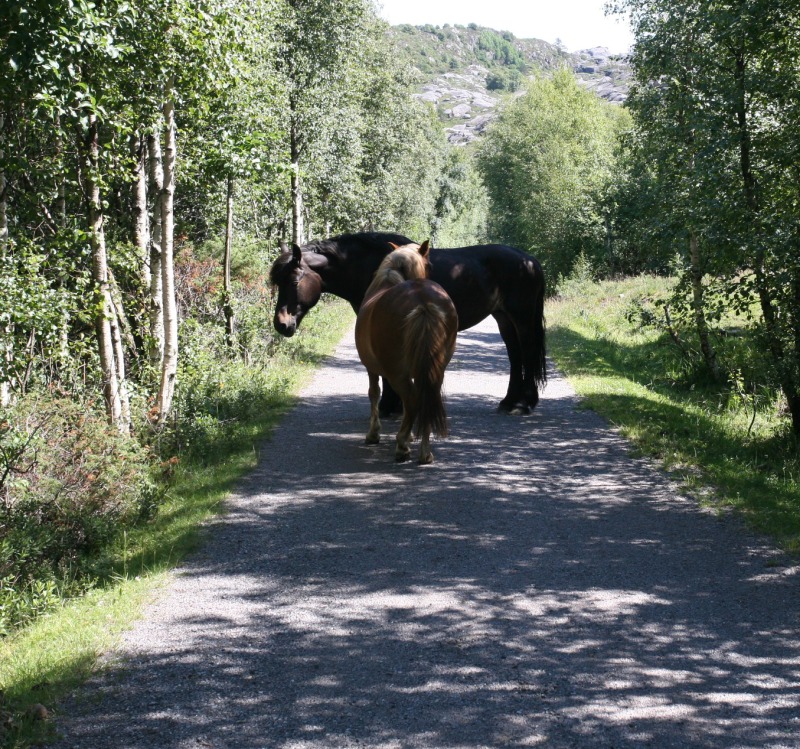 They never moved. I'm not particularly afraid of horses, but I'm reluctant to pass behind horses I'm not familiar with and who are not accompanied by a human, so I ended up going around them in the ditch. 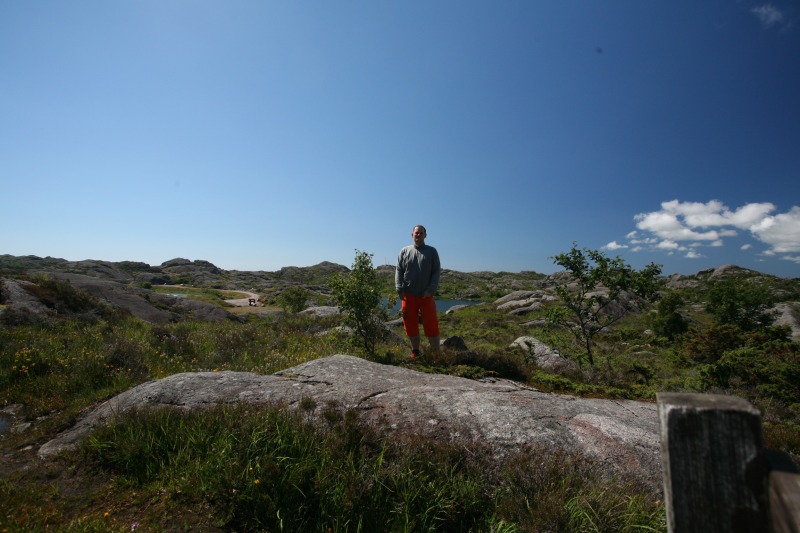 In short: No rain, until the last 30 minutes, lots of steep hills, both up and down, switch the actual tyre this time after the third tube change, staying with Bendik in Flekkefjord was great(Heck, I had a whole floor to myself). 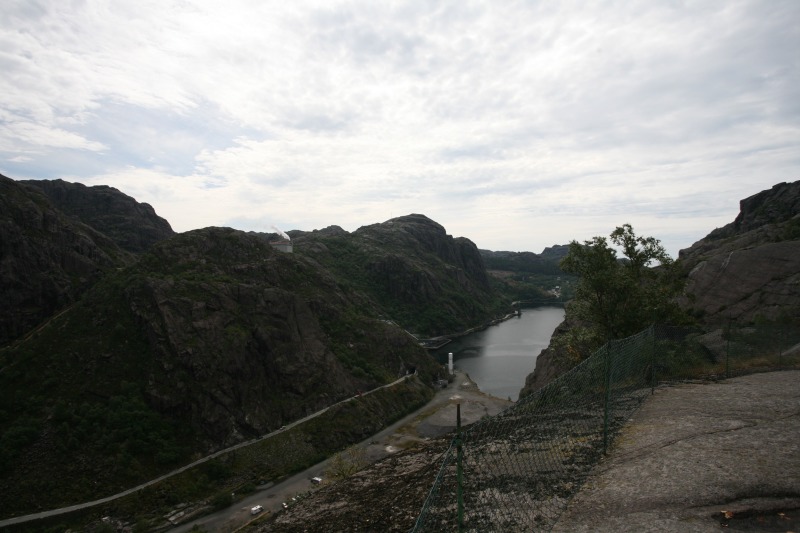 The Jøssingfjord is famous due to the Altmark Incident (http://en.wikipedia.org/wiki/Altmark_Incident), a skirmish during World War 2 where Norwegian neutrality was breached. 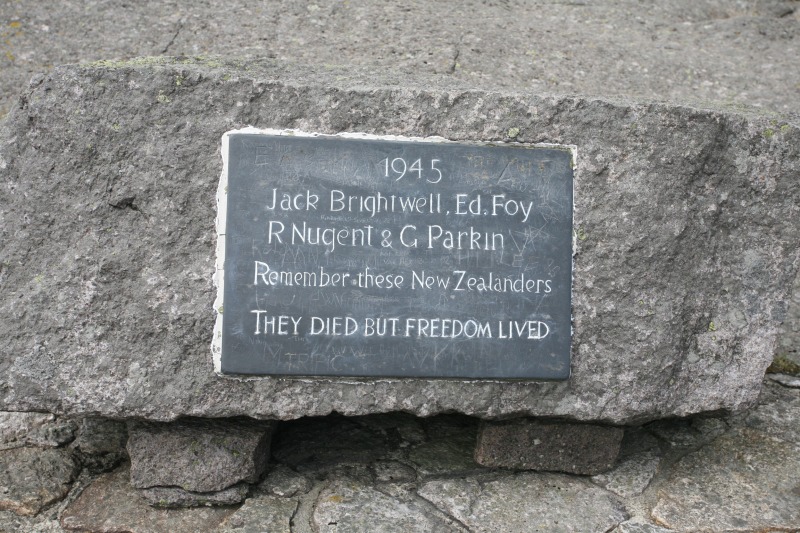 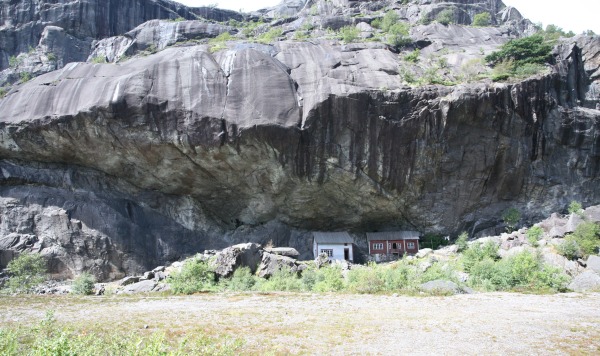 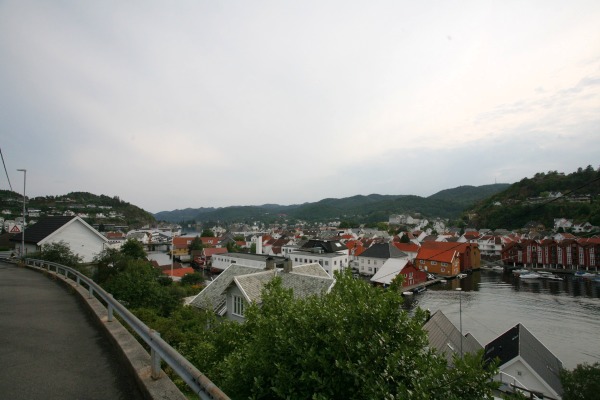 Not exactly the best weather, but my host was great and good company easily makes up for bad weather!

Started the day by getting a lift from my generous host. Cycling Flekkefjord - Lyngdal using the official cycling route is a gigantic detour since they recently built a large amount of tunnels and a GREAT new bridge across Fedafjorden. None of which you are allowed to cycle on. Then the official cycle route take you along the coast on mostly gravel roads. Wasn't doing that again.

Since the forecast was so good, I figured the little rain I had during the start of the ride was just left-overs from the thunderstorm we had during the night. So I only used a rain jacket. No rain pants. No rain covers for my shoes. BIG BIG mistake, as it was raining through the entire ride. Just as I was entering Mandal the weather cleared up.

As for the route: Good pick. All downhill on GOOD unpaved roads to Lyngdal. One big hill up from Lyngdal, then mixed. The last stretch is steep climbing on wooden roads. If allowed: Cycle on E39! It'll save you a LOT of energy.

In short: GREAT ride. Great scenery, good roads, good weather, little or no traffic. Almost lost the Strava log, but managed to resurrect it when I got home.

Also got to spend the eveing with Vegard and his family, which were nice enough to take me on a boat trip in the Kristiansand area. I even got one of those so called selfies: 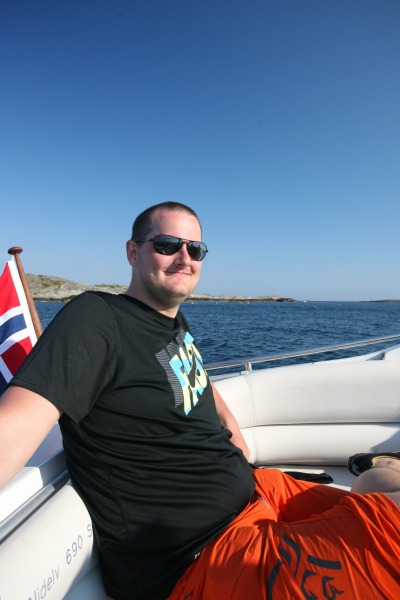 In short: Great weather, great road, then "Vestlandske Hovedvei" again. Yeah, turned out to be an other stretch of steep climbs on bad gravel road. Oh well. 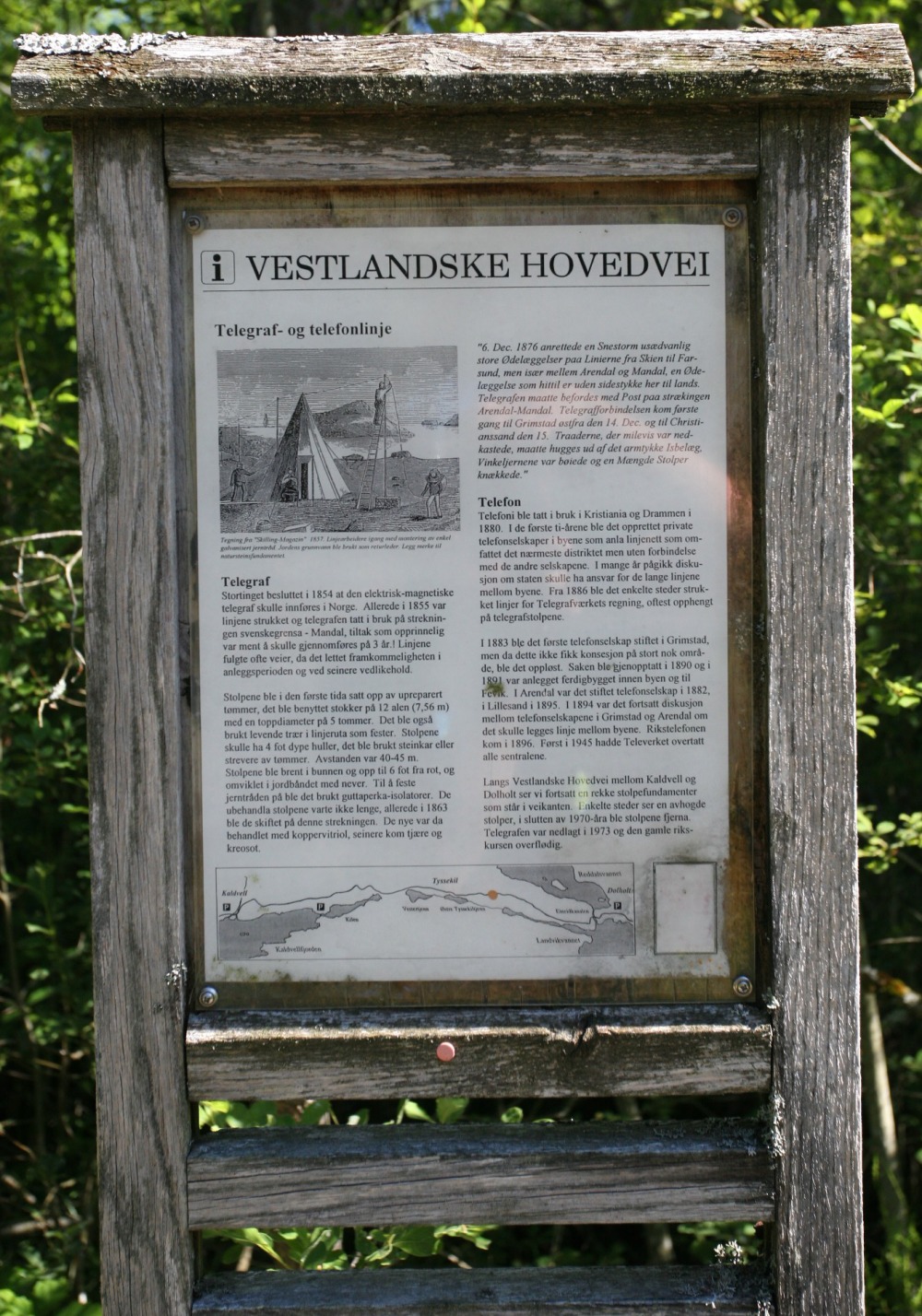 In short: Nice ride (I finally figured out Tvedestrand), heavy rain during the last 20 minutes left me completely soaking wet, but otherwise happy. 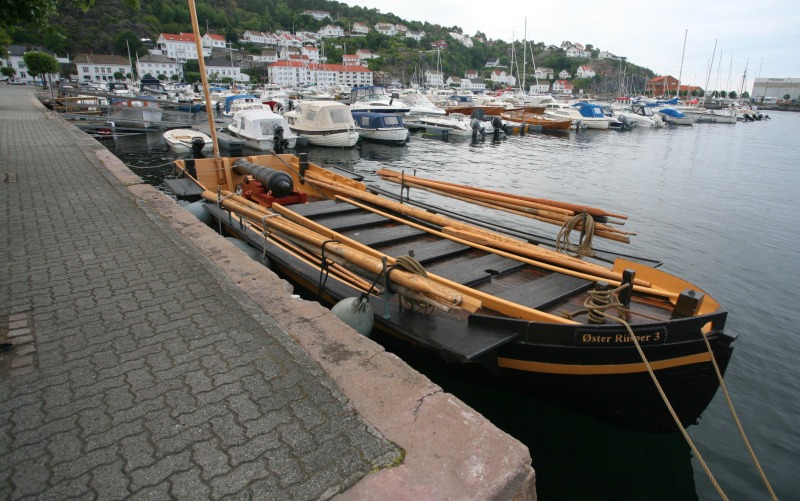 This probably takes care of tailgaters.

In short: Nice ferry ride, by far the shortest ride of the trip (hardly even counts), met an other cyclist on the ferry from Risør and we cycled together to Stabbestad. Good roads, but somewhat boring scenery. 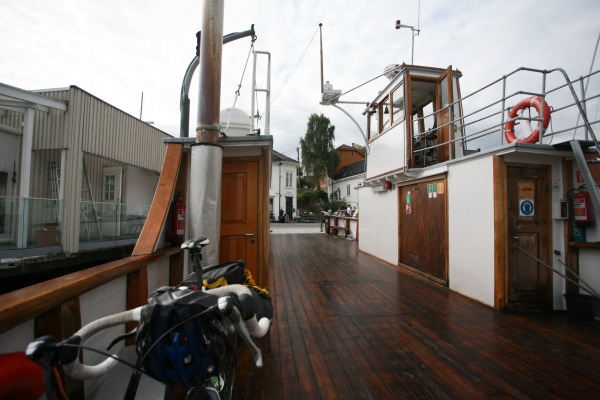 In short: "Let's just do this and get home." Ridiculously warm. Dad gave me a lift from Tåtøy to Helgeroa, then Garmin lost the data between Helgeroa and my first pit-stop in Larvik.

Tip: Do NOT follow the official cycle route here if you want to make good progress. It's very scenic and nice, but also very slow as it takes you through forest paths and whatnot. Following my route from Helgeroa to Horten was very fast and easy (flat).

The only picture I really took was from the ferry crossing from Horten to Moss: 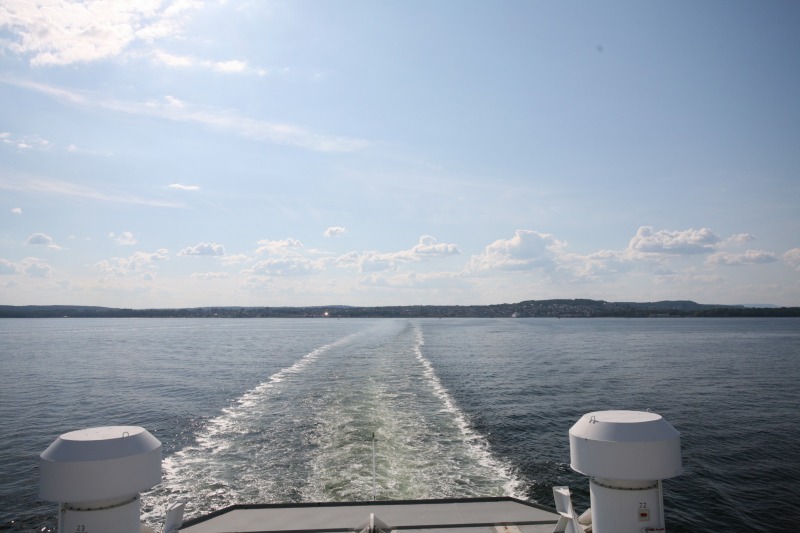 (That's Horten in the background).

The trip was a really great success. What really made it, though, was all the stops along the way.

I want to thank everyone who let me stay with them, often on short notice.

My next multi-day trip is probably going to be mountain biking, but one thing is certain: I've come a long way since I decided to get in shape 4 years ago.